Facebook for Small Business: Time For A Mindset Shift 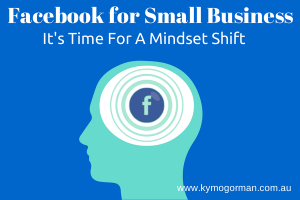 Can you hear that? It’s the sound of thousands, if not millions of small business owners voicing their frustrations at their Facebook page and its lack of organic reach.

After enjoying a free ride for years, marketers are angry that Facebook is no longer the “free marketing tool” they are used to. And after spending time and money building their platform on rented land, they are annoyed that Mark Zuckerberg is now asking us to pay to play.

There are even people threatening to leave Facebook altogether.

Do you know what that sounds like to me? Like the teenager who, after years of being supported by their parents, gets a job and starts earning money only to throw a tantrum when asked to contribute to the household by paying board.

Yes their parents had paid for everything to this point.

Yes they received a free roof over their head, free food, free everything.

But now the situation has changed, and they’re being asked to contribute.

At this point the teenager may be tempted to leave home. If they have to pay anyway, why should they pay for the place that’s always been free? They’ll move somewhere new.

How quickly does the teenager realise that living out of home is much more expensive than the board they would have had to pay their parents?

That the benefits they had at home – food, laundry, other family support – aren’t on offer at their new place?

That maybe the deal they had at home was better?

In my view, it’s the same deal with Facebook.

Yes, it’s disappointing that we now have to pay to play on what was a fantastic free tool for businesses to build their platform.

Yes, it requires a lot more strategic thinking and business nous to make a success of your Facebook activity.

Yes, it’s disappointing that people who have liked our page aren’t seeing our posts.

And according to Facebook, each time the average Facebook user logs in they could be shown 1500 pieces of content. To make this more manageable and a better user experience, Facebook filters this number down to a more manageable level. And to do that, an algorithm is applied, based on the user’s behaviour.

It’s time to stop viewing Facebook as a free marketing platform. Instead, look at Facebook as a highly targeted, cost effective form of media that, when used correctly, can drive qualified leads to your business and into your sales funnel and onto your own database.

With a well thought-out marketing strategy, and with relatively modest budgets, you can get your message in front of audiences based on their interests, location and demographics. You can easily target those who have demonstrated certain behaviours.

You can find and target your ideal customer. And you can convert them into leads.

There are few media that offer the same level of granular targeting where your return on investment is so easily measured.

Facebook is still the largest social media platform with a huge audience that logs on every day. So before you start packing your suitcase and heading out the door, consider looking at Facebook in a new light.

And if you don’t, it will mean less competition for those of us who stick around – like the younger sibling just itching to get their hands on the teenager’s bigger bedroom.